Style & Loafers Around the World 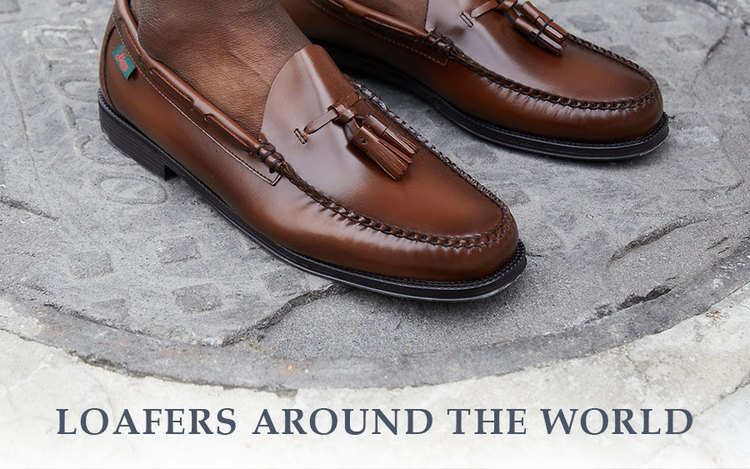 The humble loafer. A shoe that’s been around for over a hundred years. A shoe that, according to fashion editor for The Telegraph (UK) Adrian Clark, is making a massive comeback from 2020 onwards.

There are many types of loafers – penny loafer, tassel loafer, slipper loafer, driving loafer, and so much more. But did you know that G.H. Bass & Co. is credited with the invention of the timeless penny loafer almost a hundred years ago?

And thus, the loafer went on to become a worldwide classic, more versatile than almost any other men’s shoe. Cable & Co. specialises in the myriad of traditional and fashion-forward loafers that G.H. Bass & Co. and Sebago have to offer, so come on a journey with us to some of the countries which have come to epitomise the stylishness of a man in loafers.

France and Italy are the first stops on anyone’s list if they are looking for the zenith of fashion and style. But the two countries are distinct in their characteristics when it comes to how to dress your loafers.

Italy boasts the classic look; the origin of so many traditions. The earthy and natural colour palettes complement the landscape as the men wear their chinos and linens in light shades accessorised with lightweight scarfs and hats. They ooze comfort, inside out, whether they are wearing a three-piece suit or slacks and a t-shirt. In this way, Italy has set a trend for a large part of Europe, even some of the smaller French towns. But Paris has been known as the Fashion Capital of the World for centuries, and they didn’t get that title by following tradition. Here, not only are blacks, whites, greys and bright colours more popular than the warmer Italian colours, but also, they push the envelope to create outfits that few can even dream of pulling off. They give the classics a bold twist and do so with ease. This shines through in the complete confidence with which they walk the streets showing off their style pairings. There’s no rule a Parisian fashionista can’t break with flair.

The Asian Persuasion of India

The traditional menswear in India includes variations of a long shirt-like top called a kurta. These can be made in a simple cotton to wear casually with figure-hugging pants, or in elaborate, decorative, lush materials with a cigarette pants. What they all have in common is that for the look to be complete, there can be no socks in sight, as ankles have to show. The who’s who of fashion and Bollywood have been pairing all types of loafers with the various kurta styles – from tassel loafers to slipper loafers, as well as the traditional, centuries-old, unisex, Indian loafers called mojari. Ella Fitzgerald sang, ‘Summertime, and the livin’ is easy.’

That’s the vibe that countries like Greece, Spain, Portugal and even Cuba and Colombia are known for in the way they wear loafers. That is, when they aren’t wearing sandals to fight the heat. Florals and patterned shirts or pants accompany leather loafers in a nostalgic and vintage fashion. Each country adds its own flavour, but the overall look is definitely one that will be reminiscent of a specific tune, beat or dance form (invariably one that involves the movement of hips). So get on the loafer train! Get creative, get stylish, get classic or get bold, and show off your culture and heritage with a twist with the help of Cable & Co.

Thanks for signing up to our newsletter.